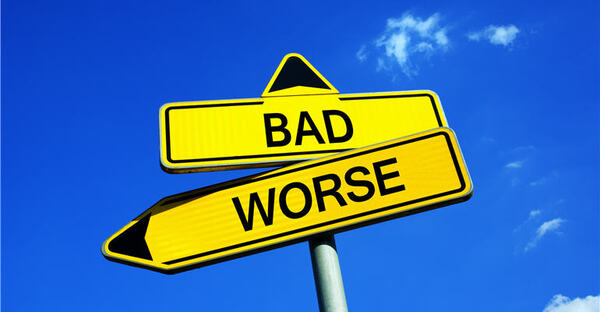 bad to worse (cover) by N/A is licensed under Adobe Stock
Want to hear a joke?

After extreme criticism of its cannabis tax structure, California’s Legislative Analyst’s Office is proposing a “major overhaul” of the current framework.

The new rules are just as idiotic as the old rules. And if the State does not adopt this new proposal, these “analysts” propose raising the current taxes.

California’s struggling cannabis industry didn’t get the recommendation many hoped for — a call to sharply lower the industry’s tax rate — but a long-awaited state report did suggest a marijuana tax overhaul.

The report from California’s nonpartisan Legislative Analyst Office, released Tuesday, Dec. 17, says lawmakers should ditch the way the state currently taxes marijuana and, instead, tax cannabis at different rates based on its potency. Such a tax structure, the report said, would result in stable revenue and discourage cannabis abuse. [emphasis mine]

Alcohol is a dangerous, addictive drug that kills more than 88,000 Americans every year. Does California tax alcohol products based upon potency, in order tp “discourage abuse”? No.

But California wants to do this to its legal cannabis industry – even though cannabis is safe and benign. This is more than mere hypocrisy. It’s completely perverse.

What this tax framework would do is to push California’s regular cannabis users (who favor higher potency products) to California’s huge and growing cannabis black market. Another poison pill for California’s legal cannabis industry.

And if the State Assembly does not adopt this ridiculous proposal?

…if the state keeps its current tax plan, the agency actually suggests an increase of up to 5%. Otherwise, LAO analysts say California risks taking in less than the $350 million in annual cannabis tax revenue needed to fund all programs mandated by the legalization bill, Proposition 64. [emphasis mine]

Cannabis taxes are already too high in California. The solution: raise them even higher.

Readers lacking a grasp of economic fundamentals may need a little help to understand the mind-boggling stupidity here.

Economics 101 provides the solution here. You lower taxes of legal cannabis products (to stimulate legal demand) and because of increased sales overall tax revenues actually go up rather than down.

This has been the federal government’s “solution” to juicing the U.S. economy for the last 40 years. Federal taxes (on corporations and the wealthy) have now gone too low – after four straight decades of cutting taxes – but the original premise was sound.

Yet what we see again and again with U.S. cannabis policies is that the “obvious solutions” that governments use in other economic contexts are suddenly not obvious when it comes to cannabis.

Cannabis insanity. Derived from decade after decade of anti-cannabis brainwashing.

In cannabis-legal states, U.S. politicians say they want to help phase-out the black market. What they do (again and again and again) is torpedo the legal cannabis industry because of their own anti-cannabis biases.

Like or dislike cannabis, it’s obviously better to have consumers purchasing legal, regulated, inspected cannabis products versus buying from the black market. Anyone thinking straight can see the logic here.

If this wasn’t previously obvious to these political knuckle-draggers, 2,000+ illnesses and 50 deaths from tainted black market cannabis vaping products has added an exclamation point to this logic.

The anti-cannabis stupidity of politicians in California (and across the United States) is literally killing Americans. It’s killing the legal cannabis industry in the U.S. And there is no end in sight.