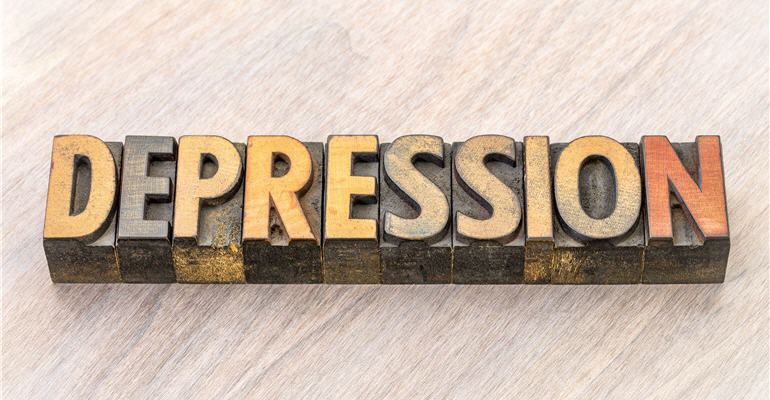 Depression (cover) by N/A is licensed under Adobe Stock
Depression is depressing.

It is one of the most common medical disorders. Globally, depression is now estimated to afflict 322 million people [source: Anxiety and Depression Association of America]. Those numbers predate the surge in depression that has accompanied the COVID-19 pandemic.

Yet the success rate for treatment is dismal. And existing drugs on the market to treat depression are problematic, at best.

For all of these reasons, there is considerable excitement among a growing segment of medical professionals about the potential of psychedelic drugs for the treatment of depression.

A headline from The Guardian illustrates these sentiments.

More on this later. First, a closer look at the issue itself.

In the United States, 7.1% of all adults experienced a major depressive episode in the past year (based on 2017 data). That translates into 11 million Americans per year.

But it’s when we look at the treatment of depression that the numbers get really depressing. A study by Columbia University Medical Center and the University of Pennsylvania found that less than 1/3rd of Americans “who screened positive for depression received treatment for their symptoms”.

Why do more than two out of three sufferers of depression not obtain treatment? It’s because existing drugs used to treat depression have a dismal success rate. The study outlines this failure.

Despite the introduction of newer-generation antidepressants, approximately 50% of patients experience non-response to treatment with a first-line antidepressant.

A 50% failure rate. Not good medicine.

It gets worse. Naturally, antidepressants are the primary “first-line” drug being prescribed for depression.

Desperate need for a better treatment

Consistently in laboratory testing, antidepressants demonstrate a level of effectiveness that is (at best) only marginally better than placebos – sugar pills. A 2019 article in Medical News Today outlines the debate, and the latest research.

Put another way, antidepressants are, themselves, little more than placebos. They generate near-zero medicinal benefit beyond the placebo effect itself.

But they are potentially harmful – even dangerous. They cause serious side effects. A WebMD article compiles a list.

Coping With Side Effects of Depression Treatment

Antidepressants can sometimes cause a wide range of unpleasant side effects, including:

This article from the National Institute of Health (NIH) paints an even darker picture.

Antidepressants and Suicide in Adolescents and Adults

In 2004, the FDA required a boxed (“black box”) warning to be added to package inserts for antidepressants in order to call attention to an increased risk of suicidal thoughts and behavior (suicidality) in children and adolescents taking these drugs. In 2007, the FDA extended the age range covered by the warning to include young adults up to 24 years of age. [emphasis mine]

Sugar pills have similar efficacy to antidepressants. But they don’t cause nausea, fatigue and drowsiness, blurred vision, constipation, dizziness, agitation, irritability, or anxiety. And they certainly don’t cause people to commit suicide.

Antidepressants have a dismal failure rate. They pose numerous serious (and even dangerous) side effects. They are being prescribed even though only a minority of users will derive any actual medicinal benefit.

Despite these shortcomings, Big Pharma has programmed doctors to prescribe antidepressants like two-legged Pez dispensers.

A 2017 article from Time Magazine (the most recent data available) indicated that 13% of Americans 12 years of age or older were currently being prescribed antidepressants.

This leads to another major downside for anti-depressants: they are very addictive. This 2018 New York Times article illustrates the bleak reality.

Long-term use of antidepressants is surging in the United States, according to a new analysis of federal data by The New York Times. Some 15.5 million Americans have been taking the medications for at least five years. The rate has almost doubled since 2010, and more than tripled since 2000.

Nearly 25 million adults, like Ms. Toline, have been on antidepressants for at least two years, a 60 percent increase since 2010.

The drugs have helped millions of people ease depression and anxiety, and are widely regarded as milestones in psychiatric treatment. Many, perhaps most, people stop the medications without significant trouble. But the rise in longtime use is also the result of an unanticipated and growing problem: Many who try to quit say they cannot because of withdrawal symptoms they were never warned about.

Claiming these drugs have “helped millions of people” is highly dubious for reasons already explained. Most of those people would have derived just as much benefit taking sugar pills for all those years – minus the drug addiction.

While the medicinal benefit of anti-depressants is debatable, the addiction and dangerous side effects are all too real.

Solution on the horizon

The medical profession desperately needs a viable alternative to anti-depressants for the treatment of depression.

Even if there were currently adequate treatment options for depression, emerging results from clinical studies involving psychedelics would be regarded as potentially revolutionary.

Far superior to the placebo-like efficacy of anti-depressants.

Based upon these results and other studies on psychedelic drugs for depression, the FDA has granted private psychedelics company Compass Pathways “breakthrough therapy” designation for its own clinical research in this area.

To quote the October 2018 press release from Compass Pathways:

The FDA designates a drug as a Breakthrough Therapy if preliminary clinical evidence shows that it may demonstrate substantial improvement over available therapy. Breakthrough Therapies are supported by the FDA throughout the clinical development programme to ensure as efficient a process as possible.

The timing of this breakthrough could not be better.

Thanks to the global pandemic and the lockdowns associated with it, there has been a huge spike in the number of people experiencing symptoms of depression along with the severity of those symptoms.

According to Statista, the number of U.S. adults currently experiencing “symptoms of depressive disorder” has nearly quadrupled in 2020 to 24.4% versus 6.6% from the same time last year.

The global epidemic of depression isn’t going to go away, even if the rise in sufferers levels off.

This is a multi-billion dollar treatment market and growing.

For investors, putting all of this together spells opportunity. Compass Pathways is still a private company although rumors have been swirling for well over a year about plans to go public.

Bloomberg stoked those rumors again in February of this year.

Move Over, Pot: Psychedelic Companies Are About To Go Public

Other companies and institutions engaging in psychedelics-based research are also targeting depression.

Depression is depressing. But there is new hope.