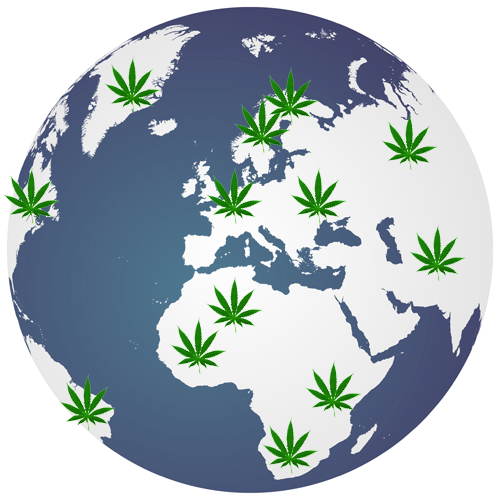 N/A by N/A is licensed under N/A
In marketing strategy, there’s a term called “first-mover advantage”. It’s when a few key players in a particular industry gain an advantage because they entered into the marketplace first.

These companies are able to establish strong brand recognition, shore up the best sources of funding, and build a loyal customer base simply because there aren’t any competitors in the way during their first few years of operation.

When it comes to the market for exporting weed, big Canadian LPs have clearly established a first-mover advantage.

There are currently 29 countries that recognize some form of medical cannabis, but only two of those countries — Canada and The Netherlands — export weed for medical use. In fact, the medical marijuana export market is dominated by just four Canadian weed producers: Cronos Group, Canopy Growth Corporation, Aphria, and Tilray.

To some extent, it’s going to be a decades-long upward battle to really capitalize on the global demand for weed, given that the drug is still illegal in most countries.

But Canadian marijuana companies are ahead of the curve in terms of making their mark overseas, as they scramble to collaborate with foreign medical marijuana producers and pharmaceutical companies keen on discovering and potentially patenting marijuana-based cures.

Read the full story in Why Canadian weed producers will dominate the global marijuana market.

Is Vice a Seed Investor reader?

It sure seems that way.

The global black market for marijuana is as much as $150 billion a year.

As marijuana prohibition laws crumble around the world, the Seed Investor has demonstrated that Canadian marijuana companies will have the knowledge, experience, and capital to supply international marijuana markets as they open up.

If you’re looking for the biggest gains in marijuana stocks, the Canadian marijuana companies with a focus on developing internationally are still the best bets in the long run.
Read More