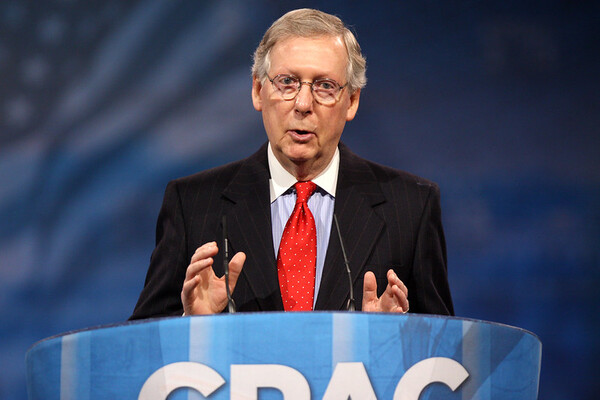 The marijuana industry, a business sector that has gone from outlaw to somewhat legit over the past few years, has managed to get the attention of a federal lawmaker that actually has the clout to make some change.

The word on the street is that Senate Majority Leader Mitch McConnell, the self-proclaimed Grim Reaper of Capitol Hill, is scheduled to meet with cannabis industry executives in California next week to get a grip on the reefer slinging trade.

The only problem is, while these big wigs of bud will have every opportunity to discuss a plethora of cannabis-related issues with McConnell during his visit – including the need to legalize the leaf at the federal level — the main focal point of their sales pitch, according to Market Report, is to get him to side with the cannabis banking bill that everyone has been making such a fuss over.

But this is the wrong move.

Leaning on a banking measure to further the cannabis movement in no way actually stands to serve the cannabis trade. Not really. The SAFE Banking Act, which was pushed through by the U.S. House of Representatives last month, is designed to create a prosecution proof barrier for banks that want to do business with the cannabis industry.

If it were to be signed into law by President Trump, it wouldn’t make marijuana any more legal in the United States, nor would it do much in the way of protecting the cannabis trade from the majority of the hardships it continues to endure.

No, this banking bill, which is often touted as a salvation’s wing for weed, is really just a step to keep banking executives out of jail for setting up accounts associated with a Schedule I substance. When broken down, that’s all the SAFE Banking Act accomplishes – it keeps banks SAFE. It was built to reassure financial executives and board members that their involvement with marijuana in legal states won’t lead to them getting raided and slapped with money laundering charges.

The bill, however, does nothing to protect cannabis industry execs from legal woes. Not at all. And since there are presently no safeguards in place to protect the recreational cannabis trade – not even one of those temporary amendments that is enjoyed by the medical marijuana community — anyone who grows and sells pot, even the ones with bank accounts, are still at risk of getting their doors kicked down by DEA.

The idea that the cannabis industry has put so much stock in the SAFE Banking Act, at least enough to squander a rare meeting with the gatekeeper of federal marijuana reform on it, suggests that the suits out there overseeing marijuana operations in this country have no clue what their business really needs.

Even a recent report from Politico suggests that the SAFE Banking Act really only has a chance at gaining traction in the Senate, where McConnell sits in the big seat, because the language of the bill has less to do with weed and more about banking. It’s kind of funny when you think about it. The most popular cannabis proposal of 2019 isn’t actually cannabis legislation at all.

The marijuana industry is confused. It doesn’t need more banking access to flourish, it needs Congress to eliminate the herb from the Controlled Substances Act so it can begin to relish in everyday commerce, just like any other legitimate industry. Not only would federal marijuana legalization provide cannabis businesses with banking access and other essential benefits, but it would also prevent them from paying ridiculous tax rates.

Furthermore, it’s not like banks aren’t doing business with cannabis operations anyway. A report from the Treasury Department’s Financial Crimes Enforcement Network (FinCEN) shows that banks and credit unions have consistently accepted more cannabis-related deposits over the past few years.

But all the pot trade keeps singing about is the need for more banking options because it is an all-cash business (which it isn’t really…pot shops accept credit cards all the time) and that sets them up for more robberies.

Yet, none of them are saying much about how the federal government continues to rob them blind every day by forcing cannabis operations to cough up in upwards of 70 percent of their earnings in taxes. They’d be better off taking their chances with hooligans and thugs.

So, no, the SAFE Banking Act is not the way to go about cannabis reform in the U.S. – it’s not even a good jumping-off point — and we need more pro-pot representatives in the trenches who understand this and want to get the narrative back on the right track. Senator McConnell, a man who already ended decades of prohibition on industrial hemp production, needs to see the importance of changing the marijuana laws in this country, too.

This product, which is now legal in 11 states and destined to move into more jurisdictions in 2020, is deserving of the same taxed and regulated freedoms as alcohol and tobacco. Someone needs to let him know, because if McConnell is starting to warm up to the idea of legalization, we need to have that conversation with him now.

But from the way it sounds, the California cannabis sect isn’t interested in leading the charge.